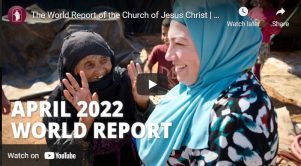 At general conference every six months, The Church of Jesus Christ of Latter-day Saints issues an official World Report of Church news and events around the world.

You can watch it in English, Spanish, and Portuguese below. The program is also available in Cantonese, French, German, Italian, Japanese, Korean, Mandarin and Russian.

During conference weekend, the World Report will be broadcast in 10 languages on the Church satellite system. It will also be shown on KSL-TV and BYUtv.