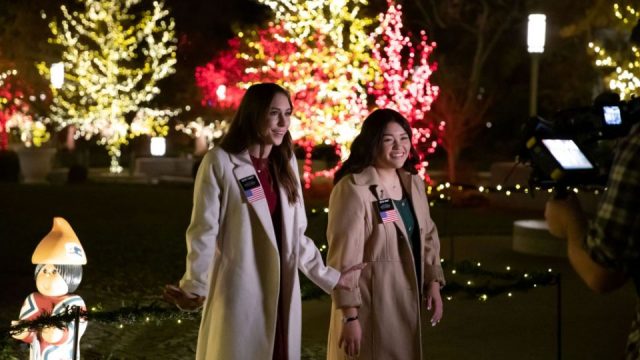 The Christmas lights are ready and musical performances are being recorded for the 2020 Christmas season on Temple Square in Salt Lake City. The virtual celebration of the Savior’s birth will be different than in previous years, but will be a beautiful and inspirational experience.

The lights on Temple Square and at the temples in Washington, D.C., and Los Angeles will be turned on in the evenings after Thanksgiving.

Celebrating the Light of the World

Christmas on Temple Square traditionally includes a kickoff performance in the Tabernacle when the lights are turned on. This year, people from around the world can enjoy a special Temple Square event and its messages from the comfort of their own homes.

December 1 at 6:00 p.m. MST: Sister missionaries serving on Temple Square will host a virtual tour of Temple Square and the Christmas lights. Watch it live on ChurchofJesusChrist.org and on the Temple Square Facebook page. The event will be published in 11 languages to watch on demand after the live broadcast.

December 2–23 at 6:00 p.m. MST: Christmas performances submitted from around the world will be broadcast nearly every night originating from Temple Square. Broadcasts will be in English but will include songs in other languages. Watch on ChurchofJesusChrist.org and on Tuesday and Friday evenings on the Temple Square Facebook page.

December 6 at 6:00 p.m. MST: The First Presidency Christmas Devotional will be broadcast from Temple Square. The program will include Christmas messages by General Authorities and General Officers of the Church. Music will be from previous Christmas devotionals by The Tabernacle Choir and Orchestra at Temple Square. Watch on ChurchofJesusChrist.org.

December 14 at 6:00 p.m. MST: Sing along and serve along with some well-known musicians. Watch on ChurchofJesusChrist.org and on the Temple Square Facebook page.

The Tabernacle Choir and Orchestra at Temple Square

Enjoy the annual Christmas with The Tabernacle Choir holiday specials featuring Kelli O’Hara and Richard Thomas. Visit the choir’s website for viewing information during December. The special Christmas broadcasts were filmed in 2019, prior to pandemic restrictions.

Tabernacle organists will continue their live concert series, “Piping Up: Organ Concerts at Temple Square,” several times a week during December. The concerts are streamed live at noon MST on Mondays, Wednesdays and Fridays on YouTube, ChurchofJesusChrist.org and the choir’s website.

“Music and the Spoken Word” airs every Sunday morning at 9:30 a.m. MST on Tabernacle Choir channels, with Christmas specials each Sunday from November 29 to December 20.