Prophet Introduces a New Proclamation to the World: “The Restoration of the Fulness of the Gospel of Jesus Christ”

During the Sunday morning session of the 190th Annual General Conference of The Church of Jesus Christ of Latter-day Saints, President Russell M. Nelson presented a proclamation in honor of the 200th anniversary of Joseph Smith’s First Vision.

President Nelson introduced and delivered the proclamation (authored by the First Presidency and Quorum of the Twelve Apostles) in a previously recorded video from the Sacred Grove in Palmyra, New York. That grove was the site of Joseph Smith’s vision of God the Father and Jesus Christ.

Download a printable PDF of the proclamation in 12 languages. More languages will be translated over the coming weeks.

The proclamation is also available in the Gospel Library app in the General Conference tab.

Learn more in the article “Prophet Introduces a New Proclamation to the World: “The Restoration of the Fulness of the Gospel of Jesus Christ.” 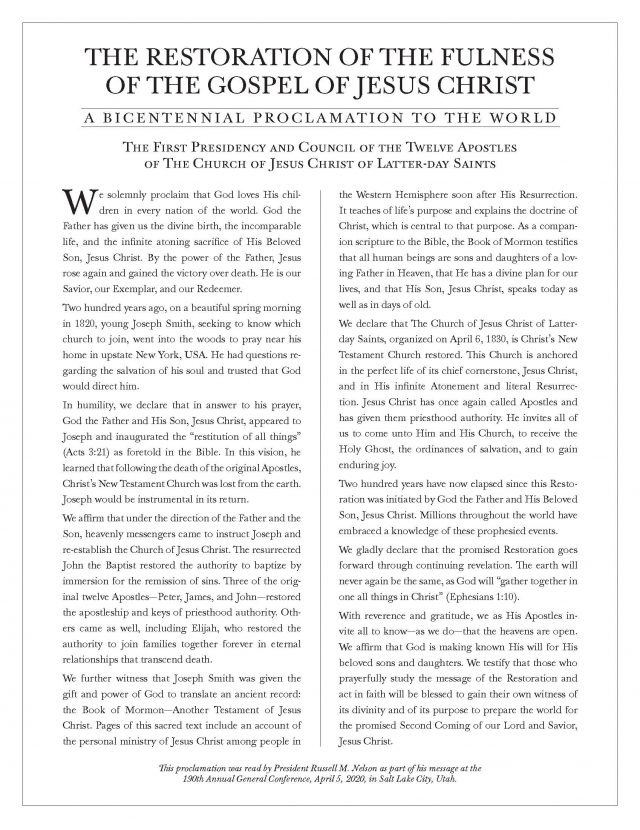