Video: His Grace “Choosing to Believe in God” 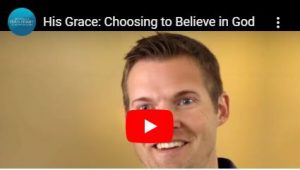 As part of the “His Grace” video series on Latter-day Saints Channel, the Church published the video “Choosing to Believe in God.”

In the video, Adam shares his story of how he found grace in Jesus Christ after questioning his faith.

Ever found yourself wondering what to believe or whether God is real? Have you been so focused on poking holes in your faith that you’ve started to disbelieve? Adam shares his story about how choosing to believe made a difference in his life.

There was a time when Adam questioned the existence of God and the beliefs of the Church. He searched for every negative form of information about God, The Church of Jesus Christ of Latter-day Saints, and Christianity in general—all in the name of being intellectually honest.

But if Adam was to be completely honest, he had to acknowledge evidences that supported the existence of God. Adam chose to recognize personal evidences that God loved him.

In choosing to believe, Adam became converted to the restored gospel of Jesus Christ once again. He gained knowledge and understanding. Even though his knowledge isn’t perfect, the peace he feels is greater than before.

“God can take the biggest train wrecks in our lives, and He can make something beautiful out of them.”

Have you had a faith crisis? What did you do during that time?