Video: One on One 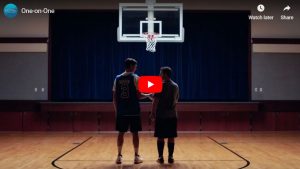 In the video “One on One,” Troy Russell shares how he was able to find joy and peace again after the loss of their son Austen in a tragic accident.

Troy’s friend John showed a great example of being a friend and listening.  By ministering to him, Troy was able to feel the Savior ease his burden of grief.

The Russells tried to face their grief and find peace, but Troy really struggled to return to his daily routine. His basketball buddy, John Manning, saw the community rally around the Russell family and wondered how he could help.

Realizing that Troy had stopped attending their weekly basketball games, John called and texted Troy every day until he promised to go with him to play basketball. John showed up at 5:15 a.m., warning that if Troy was not on the curb by then, he’d go in the house and wake him up. As they traveled to and from their games, Troy opened up about his heartache, despair, and grief.

John discovered that what Troy needed was a good friend who showed up and listened. Through John’s ministering, Troy felt the Savior ease his burden of grief.

Learn how to minister better at ministering.ChurchofJesusChrist.org.