Video: Living With the Pain of Childhood Abuse 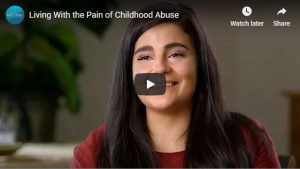 The Church video “Living With the Pain of Childhood Abuse” is about a woman who experienced the traumatic pain of childhood abuse.

The childhood trauma Erin experienced contributed to depression and feelings of hopelessness. God’s grace gave her courage to find the resources she needed to begin healing.

“Without God’s help, my life would not be nearly as beautiful, as hopeful, and as wonderful as it is now.”

“If I just drove off the road, it would all be over. Everyone would forget about me, and it wouldn’t hurt anymore.” But Erin knew that wasn’t the answer.

When Erin was growing up, home was never a safe place for her. She was physically, mentally, and sexually abused by the person who was supposed to protect and take care of her. When she told her mom about the sexual abuse, they left their home.

Finding her way after they left home was difficult. Erin stopped going to church and started doing things she thought would make her “happy.” But she never felt true happiness. After Erin graduated from college, the traumatic experiences she had suffered as a little girl came to the surface. She still saw herself as the little girl who thought nobody loved her. Physically she had healed, but mentally and emotionally she still had deep wounds.

While living with a family she’d known in New York, she mentioned to them her self-destructive thought about driving off the road. They immediately came to her rescue and helped her understand that she had depression. After going to an emergency clinic and receiving medication, her recovery began.

The childhood trauma Erin experienced contributed to her depression, and she needed a therapist. This therapist helped Erin face her past and understand that it wasn’t something she could ignore. While attending therapy, Erin also turned to God, and she began to see herself as a person worth loving. God gave her the strength to work through her challenges.

God’s grace was in the courage He gave Erin to find the resources she needed to begin healing. Without God’s help, Erin’s life wouldn’t be as beautiful, as hopeful, and as wonderful as it is now.