Translations of the Book of Mormon 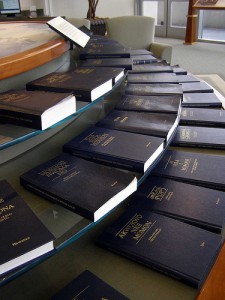 The Book of Mormon is published in 107 languages, and many of them are available in multiple formats online.

In March 1830, 5,000 copies of the Book of Mormon were printed in the E. B. Grandin print shop in Palmyra, New York. From that humble beginning, today the Church prints over 3 million copies a year on large web presses. By the end of this year, nearly 150 million copies will have been distributed. Truly, this important witness of Jesus Christ is beginning to cover the earth.

See an updated list of the translations of the Book of Mormon.