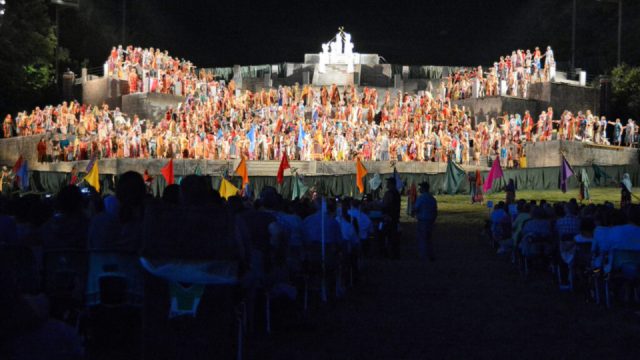 The Hill Cumorah Pageant has ended after 84 years of live performances.

​As a thank-you to the tens of thousands of participants, volunteers, and audience members over the years, The Church of Jesus Christ of Latter-day Saints presented a devotional on July 9, 2021, along with a video of the pageant presented in 2019.

How to Watch the Pageant

The video is available in English, English descriptive audio, Spanish, Portuguese, and ASL.

Background About the Hill Cumorah Pageant

The pageant featured scenes from the Book of Mormon and was performed each year on the hillside where the Prophet Joseph Smith experienced five encounters with the angel Moroni and retrieved the ancient gold plates from which he translated the Book of Mormon.

Occurring annually since 1937, the Hill Cumorah Pageant was one of the largest outdoor theater productions in the United States. The 2019 pageant featured its largest cast ever with 770 participants, whose ages ranged from 6 months to 82 years old, filling 1,200 roles. The cast, 150-person staff, and crew volunteered an estimated 230,000 hours.