Hope Works Video: We Can Turn to God When Things Don’t Go Our Way 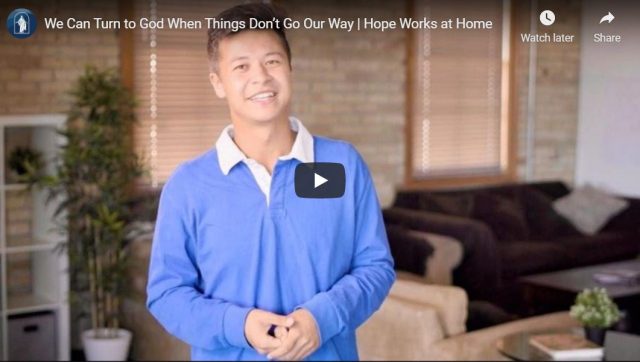 In the new Church video “We Can Turn to God When Things Don’t Go Our Way | Hope Works at Home,” Hollis explains that failure is not in trying, it is in not trying at all. Failure invites us to turn to God, who is the source of all our hope. When we have problems in life, do we turn to God or turn away?

For the longest time, I’ve dreamed of becoming student body president at my university. After months and months of hard work, my dream fell apart by just 3 votes out of 10,000 votes submitted during the election. Pain and confusion immediately followed.

We all decide how we see our 3 votes. Are those 3 votes going to be the things that keep us from being happy or be the things that propel us forward. For all of who you who have failed, keep your chin up. I’m a firm believer that the best things are yet to come, and if you will turn to God in our failures, He will get you there. God has great things in store for all of us, and I think our failures remind us how much we really do need to depend on Him.

Watch the video below, “We Can Turn to God When Things Don’t Go Our Way | Hope Works at Home.”

For Hollis, losing his bid to become student body president by 3 votes was much more disappointing than if he’d lost by 500 votes. Losing when he was that close to winning was crushing. Just a little more effort, he thought—talking to or texting just three more people—and he could have won and been able to do so much good.

Reality set in a little later, he said, when he called his mother and broke into tears as he explained the results. He wanted to win out of respect for her and all they had endured together. He wanted to show that he could do hard things.

The morning after the elections, Hollis awoke to find that his mother had driven during the night to be there to comfort him when he awoke.

Sometimes you question the Lord and ask why, he said. But when he took time to listen, he learned empathy. “The purpose of failing has changed for me,” he said. “Failure is not in trying; failure is in not trying at all.”

In time Hollis learned two things: First, when he turned to God in his failures, the disappointments of life made more sense. And, second, with failure comes resiliency to become a tool to accomplish what the Lord wants done.

Three votes kept Hollis from what he wanted. But those three votes also opened doors to success that he hadn’t anticipated.

“All these experiences I’ve had in this life have pointed me towards [God],” he said. “Our failures really remind us of how much we really do need to depend on Him.”