Inspirational Video: “A Flood of Rescuers” 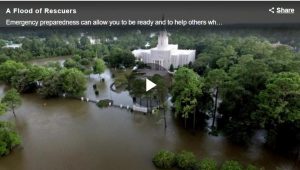 A new video from The Church of Jesus Christ of Latter-day Saints, “A Flood of Rescuers,” documents the inspiring rescue efforts that took place after Hurricane Harvey in 2017.

Harvey was a category 4 hurricane that formed in late August 2017 and destroyed communities in the state of Texas. 107 people died, thousands were left homeless, and damages topped $125 billion. The Houston Texas Temple suffered significant damage, including the complete flooding of the baptistry.

Emergency preparedness can help you to be ready and to help others when disaster strikes. Follow the example of these volunteers who were ready to rescue others in flooded areas after the hurricane.

Learn how you can be prepared for emergencies.