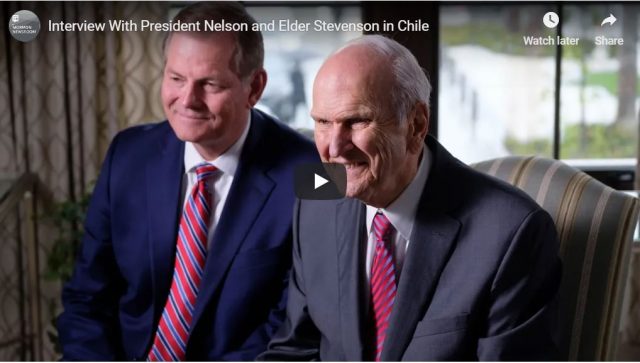 In this video interview, President Russell M. Nelson and Elder Gary E. Stevenson of the Quorum of the Twelve Apostles shared insights about their recent travels in South America.

The temple dedication in Chile was the final event on their nine-day tour to five South American countries, which also included Peru, Bolivia, Paraguay and Uruguay.

“The Church is relatively young here in South America,” President Nelson said, noting the growth in membership on the continent. “Ninety years ago, nothing. … I’m 94 years old. I was born in 1924. … And now, former General Authorities were there and young people who have been in the Church for a long time. We saw four-generation families.”

Regarding the process of the Church restoration continuing, President Nelson said, “If you think the Church has been fully restored, you’re just seeing the beginning. There is much more to come. … Wait till next year. And then the next year. Eat your vitamin pills. Get your rest. It’s going to be exciting.”

Watch a video interview with President Nelson’s wife Wendy as she explains her observations about her husband’s role as prophet.