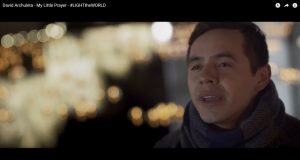 A year ago, David Archuleta created the music video “My Little Prayer #LIGHTtheWORLD.” It has been one of the most viral #LIGHTtheWORLD videos ever—having been viewed 1.3 million times on YouTube and 3.2 million times on Facebook. In a podcast from LDS Perspectives, David explains how this song came to him in a dream.

Here’s the music video if you want to enjoy it again:

Learn how you can #LIGHTtheWORLD this Christmas.

David explains that both the music and lyrics to this song were given to him in a dream:

“That night I had a dream. It was different than anything I had experiences before. In my dream I was praying-having a conversation with God. The conversation was also different. I was singing. I could hear simple chords in my dream that I was laying a simple melody and prayer on top of.

“As I was having this conversation in music with God, He told me to get up and write this down. I thought and said, “…but… I’m sleeping. I’m not sure I know how to get up from a dream!” He told me “if you don’t get up now, you’ll forget it in the morning.” I tried everything I could to wake up, and I did! There in the middle of the night I went straight to the piano with the words and melody I had spoken in my dream still clear in my head, and wrote it all down. It was the fastest I had ever written a song because I feel this one was given to me.”