Elder Stevenson Urges Use of Technology to Spread Gospel 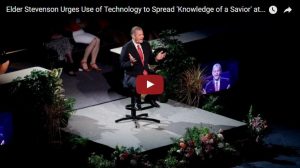 “May each of you have the courage to blog, pin, like, share, post, friend, tweet, snap, and swipe up in a way that will glorify, honor, and respect the will of our loving Heavenly Father and bring a knowledge of the Savior to your family, loved ones, and friends,” said Elder Gary E. Stevenson at the conclusion of this week’s BYU Women’s Conference.

Elder Stevenson’s talk was full of examples of how technology is advancing the Church in this dispensation.

“The opening of the dispensation of the fulness of times in 1820 brought an enlightenment upon all mankind and a waterfall of technological advancements,” Elder Stevenson said. “It brought with it the industrial age and communication tools allowing the prophecy of King Benjamin to be fulfilled.”

He quoted President David O. McKay, who said that “scientific discoveries that ‘stagger the imagination’ would make possible the preaching of the gospel to every kindred, tongue, and people. And further: ‘Discoveries latent with such potent power, either for the blessing or the destruction of human beings, as to make man’s responsibility in controlling them the most gigantic ever placed in human hands. … This age is fraught with limitless perils, as well as untold possibilities.’”

President Spencer W. Kimball similarly prophesied, “I believe that the Lord is anxious to put into our hands inventions of which we laymen have hardly a glimpse.”

Advances in communication and media seem to be a “literal fulfillment of the prophecy of King Benjamin, President McKay, and President Kimball,” Elder Stevenson said.

“We live in a unique world, with the ability to preach the gospel of peace literally at our fingertips.”

Watch excerpts from Elder Stevenson’s talk in the video below: