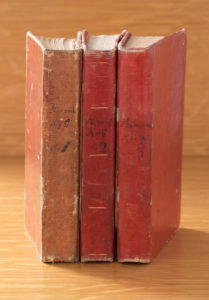 Minutes from the Nauvoo Council of Fifty have just been published as the latest volume in the Joseph Smith Papers project.

These documents offer a candid view on how early Mormon leaders handled the temporal affairs of The Church of Jesus Christ of Latter-day Saints. The minutes give insight into the thinking of Church leaders in the mid-1840s, which was a particularly turbulent time in both Mormon and American history.

The Council of Fifty discussed matters such as possible sites in the West where the Saints could settle. They were also involved in Joseph Smith’s 1844 presidential campaign, which came about because none of the major candidates would stand up for Mormon rights. The council was also involved in a variety of matters in Nauvoo, including the building of the Nauvoo Temple and in governing the city after the Illinois government took the city charter away from the Latter-day Saints. 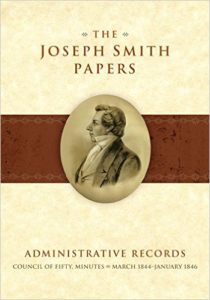 The minutes were kept secret because the council members believed that knowledge of the discussions would increase the already widespread, but mistaken, belief that the Saints opposed key elements of American democracy.

The minutes were taken to Utah during the Nauvoo exodus of 1846 and used in preparation of the multi-volume manuscript history of the Church that Joseph Smith had begun. But they continued to be guarded, and at some point they became part of the collection of the First Presidency, where they remained through the 20th and early 21st centuries. The First Presidency has now authorized the publication of the minutes as part of the Joseph Smith Papers.

Watch the video below, “What Was the Council of Fifty?”

You can order the book The Joseph Smith Papers, Administrative Records: Council of Fifty, Minutes, March 1844-January 1846 from Amazon or from Deseret Book.

Learn more about the history and importance of these documents: