Have you Watched the LDS Face to Face Event with David Archuleta?

If you haven’t yet watched the LDS Face to Face event with David Archuleta, I highly recommend it for a family home evening or church youth activity.

Youth from around the world asked questions in real time and heard about David’s decision to postpone a successful music career to serve the Lord. He shared his testimony in word and song, shared stories from his mission, gave advice for future missionaries, talked about how the temple helped him, and even answered a question about what he looks for in a future wife. 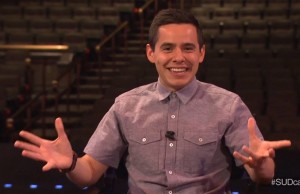 Over 50,000 LDS youth participated in the event, which was held live in Spanish, then live in English. It has been watched more than 75,000 times since.

Read about the success of the event and see pictures from it.

If you missed the event, you can watch the Face to Face: Live Facebook Event with David Archuleta video in English below: