Meet the Mormons Released in Spanish 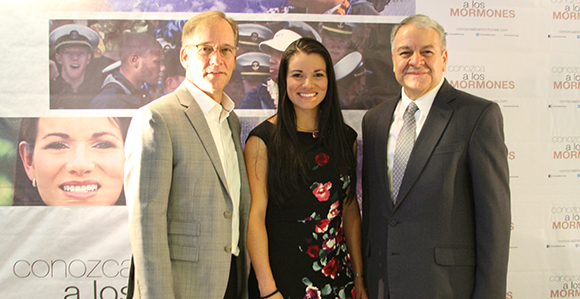 The Spanish translation of the movie Meet the Mormons was released as Conozca a los Mormones on February 19.

The photo above shows film director Blair Treu, kickboxing wife and mother Carolina Muñoz Marin, and Elder Benjamín de Hoyos of the Seventy at a press conference in Mexico City promoting the release of the Spanish film on February 19. David Archuleta, who sun the theme song “Glorious,” was at the film’s premiere to sign autographs with Brother Treu and Sister Marin.

“We had an incredible time in Mexico,” Brother Archuleta said in an Instagram post. “I hope we go back soon because the people are so great, and I made friends very quickly.”

Meet the Mormons features the stories of six Church members, including Sister Marin from Costa Rica. The film is meant to break stereotypes about the Church and its members.

Conozca a los Mormones was released in 50 Cinemex theaters in 35 cities throughout Mexico on February 27. Mexico is the second country to nationally release Meet the Mormons.

Read more and see photographs in the article “Meet the Mormons Released in Spanish.”