Final Supercut Video of “Glorious” from Meet The Mormons 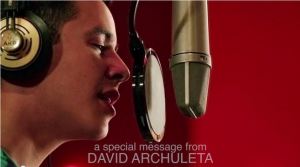 On October 24, David Archuleta invited you to record yourself singing your own version of the song “Glorious” from the soundtrack of the movie Meet the Mormons.

Over 420 people posted their versions, which have been watched collectively over 720,000 times. Here is a playlist of the top 30 submissions, sorted by most viewed. The most viewed (by Working with Lemons) has over a quarter of a million views.

Here is the final supercut video featuring people from all over the world:

Here is a playlist of all the Glorious submissions.

Thanks to everyone who submitted videos and to those who participated by watching and supporting this cause in any way.

Stephanie Mabey wrote the song “Glorious,” and it was originally released on her album “Wake Up Dreaming.” The rendition sung by David Archuleta was used in the soundtrack for the movie Meet the Mormons.

Read other articles about the movie Meet The Mormons.