How Did Joseph Smith Translate the Book of Mormon? 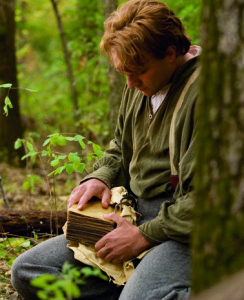 How did Joseph Smith translate the Book of Mormon from the golden plates? The essay “Book of Mormon Translation” in the Gospel Topics section of LDS.org (topics.lds.org) gives insight into the process.

Joseph Smith and his scribes used two instruments in the translation process. When Joseph looked into the instruments, the words of scripture appeared in English.

These two instruments were apparently interchangeable and worked in much the same way, although Joseph often translated with the single seer stone rather than the two stones bound together.

Some accounts by the scribes and others who observed the translation, say that Joseph studied the characters on the plates. However, most of the accounts speak of Joseph using either the interpreters or the seer stone by placing them in a hat and pressing his face into the hat to block out extraneous light. He would then read aloud the English words that appeared on the instrument.

Read the entire essay “Book of Mormon Translation” in the Gospel Topics section of LDS.org (topics.lds.org).

For more details on the translation process, see