Book of Mormon Experiment: Let the Book Speak For Itself 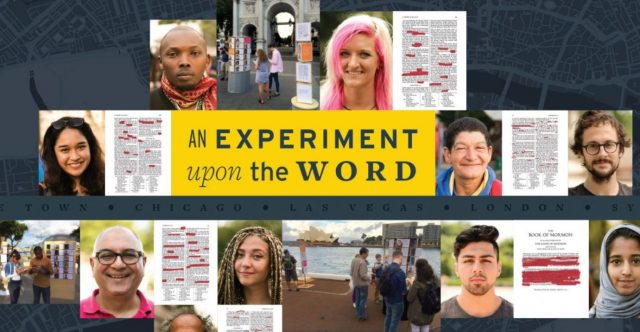 At each location, the team invited 531 pedestrians (one person for each page of the book) to read a page of the Book of Mormon, looking for references to God and Jesus Christ on their respective pages. Participants not only came from different geographic locations, but had diverse religious affiliations and cultural identities. Sheets explained that the Book of Mormon Social Experiment was a powerful reminder of the similarities of God’s children and the Christian message of the Book of Mormon. Participants were surprised at how much their page related to the practices in their own religion. “Through this experiment, the participants each became a witness that their individual page testifies of Christ,” said Sheets.

Watch the video below, “Book of Mormon Experiment.”

Below are some of the actual people and the pages they marked up as part of the experiment. 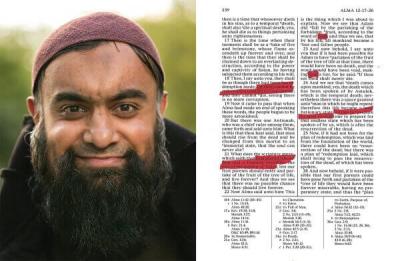 Nazam, United Kingdom, Muslim, page 239.
“I can see a lot of similarities between what I read here and what I read in the Quran. I do not think the two are as different as many believe them to be. I think we actually believe very similar things. I felt good as I read it, and as long as it is teaching people to be good to one another, then I believe it to be good.”

The video below, “Let the Book of Mormon Speak for Itself,” contains quotes from Elder D. Todd Christofferson from the 2017 seminar for new mission presidents. 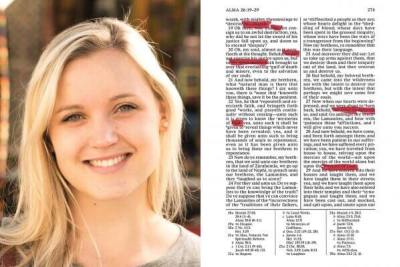 Kirsti, South Africa, Christian, page 274.
“Religion should be about bringing people together and overcoming our differences to become united. In South Africa we have so many differences; we need more of what this verse taught me, that we can be one in Christ.”

“The book speaks for itself,” says Sheets. “This is another testament of Jesus Christ, not because it says so here on the cover, but because if you read it, you’ll come to know for yourself.” 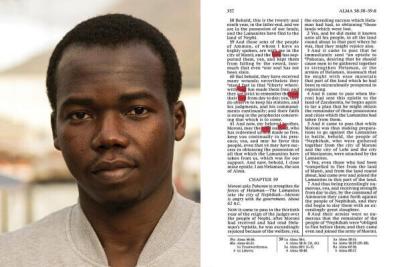 Sylvanus, Benin, Catholic, page 357.
“Being from a country that knows something of oppression and war [Benin], I know what it means to pray for freedom. I felt this page tell me God will bless people of faith with the freedom they desire.”

Now Sheets and his team are working with the Church’s Missionary Department and Priesthood and Family Department to prototype and refine the experiment. In one test, the BYU team worked with missionaries and local young single adults to run a display in Georgia over three days. Elder Kirk, who had been serving for 23 months, calls it a highlight of his mission: “My whole mission I have been trying to get people to read the Book of Mormon, and in just three days I have gotten as many or more people to read from it than the whole rest of my mission.” 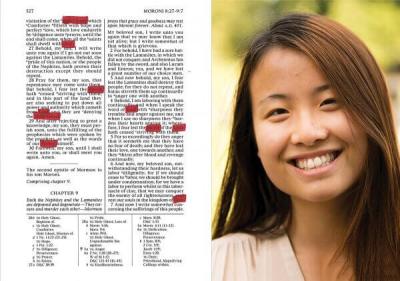 Katie, China, Agnostic, page 527
“It was really cool. I had never read a religious book until today. I got to see what everyone is talking about and identify those words.”

This experiment is just one way to creatively invite people to read the Book of Mormon. What will you do?

Learn more in the articles “An Experiment upon the Word” in BYU Magazine and “Elder Christofferson Says Book of Mormon Is ‘Tool of the Harvest’” from the Church News.

Thanks for subscribing! You'll get an email notification each time a new article is published on LDS365.com.