Video: Why Do Bad Things Happen to Good People? 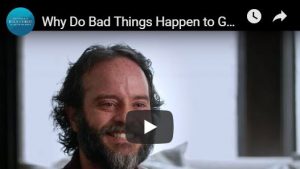 Brock worked hard to support his family. And when his career took off, he felt like he had life by the tail—until the day the car he was in was struck by a large truck. In an instant, his life changed dramatically, leaving him to wonder why bad things happen to good people.

In his frustration and anger, Brock sought to understand. He’d never wanted to be poor. He’d worked hard to build a successful career, and to have it taken away—by someone who chose to text and drive—was hard.

After questioning God, Brock became a changed man. The accident robbed him of his financial security and a career he loved, but it softened him. His relationship with Jesus Christ and his compassion for the suffering of others grew.

Brock sees the evidence of God’s love for him not in monetary success or in the good or bad things that happen, but in his children’s love and his wife’s kindness. Brock’s hope in Christ teaches him there are good things to come.

Why do you think God allows bad things to happen to good people?

Watch other videos from the Church.